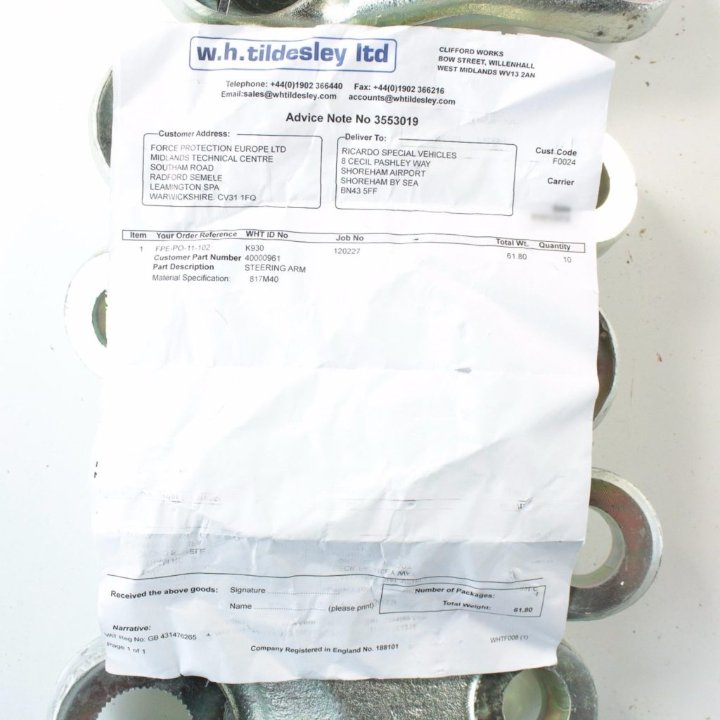 APC Overnight which does not provide a defence courier service and we can see why.

The hessian sack containing Force Protection Foxfound (Ocelot) steering arms also contained documents from the manufacturer and sub-contractor for Force Protection Europe which has since been acquired by General Dynamics Land Systems.

This is another example of the potential risks of dispatching goods via an amateur parcel company like APC Overnight. The documentation was not buried in the sack so I would suggest gross negligence and ignorance.

Again, APC Overnight have demonstrated have not made reasonable efforts to trace back goods to their true owner before lawful resale. We have acquired many more goods.

Ocelot (vehicle)
The Force Protection Foxhound is a British armoured vehicle that is scheduled to replace the United Kingdom’s Snatch Land Rover with British forces. It received the service name Foxhound, in line with the names given to other wheeled armored vehicles in current British use, such as Mastiff and Ridgeback, which are based on the Cougar. This is not to be confused with the BAE Systems Australia Foxhound, a modified Short Brothers S600. The goal in replacing the Snatch Land Rover was to improve protection of personnel against improvised explosive devices (IEDs).

Designed by Force Protection Europe and the automotive engineering company Ricardo, the Ocelot is intended for use as a light protected patrol vehicle (LPPV) with specialised protection against roadside bombs and improvised explosive devices (IED)s.

Force Protection Europe (FPE) is the European subsidiary of Force Protection Inc, which was acquired by General Dynamics in 2011. The UK based company developed the Ocelot (also known as Foxhound), a light-weight mine-protected military vehicle, which was developed to replace the Snatch Land Rover. FPE won a £180 million contract from the British Ministry of Defence in 2010 to supply 200 Ocelot vehicles. Following the acquisition by General Dynamics in December 2011, the Ocelot is marketed as part of General Dynamics Land Systems vehicle portfolio.